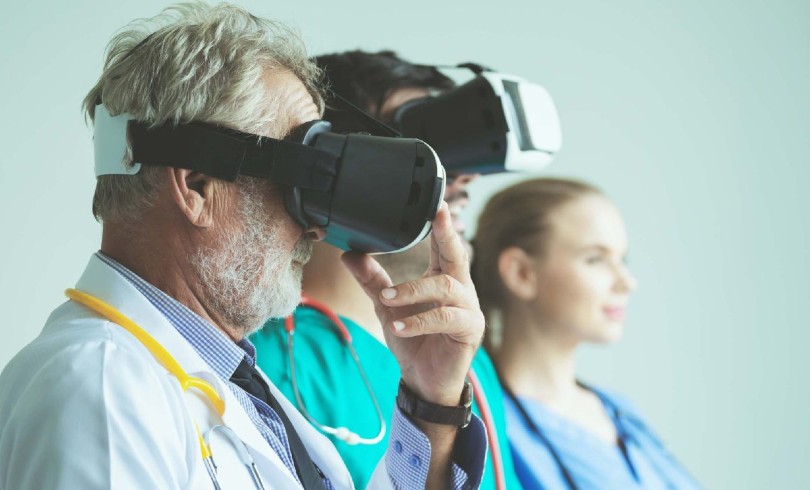 If you went to the theaters this summer, you may have seen Stephen Spielberg’s latest hit, Ready Player One. That film highlights how virtual reality (VR) is primed to revolutionize how people play video games in the future.

Of course, this is not a post about video games. But VR is about more than just entertainment. In fact, it’s already being used to help dementia patients throughout the world.

Virtual reality is a multimedia technology designed to immerse a person in a virtual world, often by shutting out real-world distractions using a headset for video and headphones for audio. Although virtual reality is still a relatively young technology, and still largely associated with gaming, companies around the world have already built VR applications to help in diagnosing, treating, and teaching about dementia.

Let’s look at how they are doing that.

But first, let’s review the basics of dementia.

Dementia is a broad term for any of a series of conditions that cause cognitive decline severe enough to interfere with a person’s day-to-day living. The most common form of dementia is Alzheimer’s disease. Dementia proceeds in stages: People with mild dementia can often continue to live at home, but in severe cases, a person must rely entirely on others for his or her care.

Now, let’s consider how scientists and doctors are using VR to help those living with dementia.

In 2016, a UK video-game developer collaborated with Alzheimer’s Research UK and other organizations to create the mobile game Sea Hero Quest. Sea Hero Quest is a game designed to help researchers collect information about how our brains navigate in a 3D space and remember where we’ve been.

Such spatial perception is “one of the earliest skills to deteriorate in a patient with Alzheimer’s.” Ultimately, researchers hope that someday Sea Hero Quest—or something like it—could actually be used to diagnose dementia even in its earliest stages.

According to the game’s creators, just two minutes of gameplay produces as much data as five hours of study in a lab. A VR version of the game was released in summer 2017, allowing researchers to study spatial navigation in a more realistic setting.

Virtual reality and similar immersive technologies have also been used to help those living with dementia cope with their condition, including by helping to regulate their mood. For example, the New York Times recently reported on how nursing homes in the Netherlands are using images and videos of comfortable settings to help reduce patients’ stress. (The article has great pictures of the technology in action, so be sure to check it out!)

A 2016 article in Tech Republic described an even more VR-centric approach being tested in Australia. There, patients are given a version of the Samsung Gear VR headset with five video scenarios for users to choose from: aquatic, travel, animals, relaxation, and adventure.

VR isn’t just being used overseas. The Washington Post reported a couple years ago on One Caring Team, a Southern California company developing a similar technology. The head of that company said that VR lifts the moods of those patients who are so anxious and bored or depressed because they think no one cares about them. We’ve brought beautiful places to seniors who can’t go anywhere.”

Helping Others Empathize with Dementia Patients

Finally, VR is being used to help loved ones, future caretakers, and others understand what it is like to live with dementia, increasing empathy and reducing stigma. As with the other uses of VR, these techniques are being pioneered around the globe.

For example, here in the U.S., Science Daily reported on a VR program that is currently being tested with medical students in Chicago. That program puts students in the shoes of an elderly man with mild cognitive impairment, visual problems, and hearing loss; or of a middle-aged woman progressing through the stages of Alzheimer’s.

That program sounds similar to EDIE, an “Educational Dementia Immersive Experience” released in the fall of 2016 by Alzheimer’s Australia Vic, a charity that provides “specialized dementia information, education and support services” headquartered in the Australian state of Victoria.

These are just a few of the ways that new technology is being applied to help improve the lives of those living with dementia. Unfortunately, there is still no cure for dementia, and no treatment is known to slow its progression. But with the development of new technologies like VR, we will continue to see novel approaches to helping doctors and patients manage it.